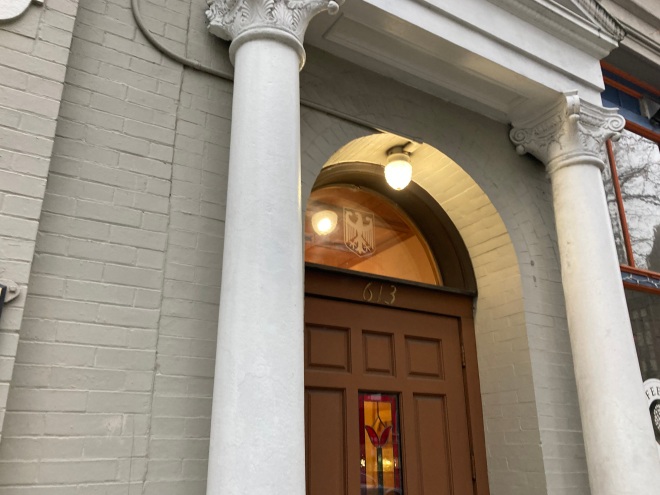 It’s just the vacant, creepy house up the street that’s right next to this quaint historical monument.

I didn’t really know what this historical monument was, and even after reading the plaque on the outside I was more confused.

An Assay Office, according to http://theessayoffice.com, treats precious metals to see the validity and to protect consumers from buying fraudulent items. Once the item passes the test, it is stamped with an official hallmark of authenticity.

The Seattle Assay Office was first built in 1868 by a Thomas Prosch for a place for businesses to have an office or a space for an entertainment venue. It was flipped over as an Assay Office in 1898 when it was decided the flow of the gold from the Yukon Gold Rush was large enough that it needed to be weighed and evaluated so people could cash out. The found gold was melted down into bars, stamped with a  Federal seal and sent off to the mint in Philadelphia in exchange for a government check to the individual. Eventually the office was shut down in 1935 due to the decrease of the gold deposits.

The Seattle Assay Club, when googled, is also called The German Club. I learned that once business died it briefly became a gathering place for German-American citizens before World War II after being purchased by a Deutshes Haus. During the war it was used for a variety of different Seattle women’s organizations. It was then renovated and a second floor was added for a ballroom that held dances for U.S. Military officers. After the war it was given back to the German Americans and it’s currently back to being a German gathering. It’s not open to the public so I can’t describe the inside of the building.

But I thought that was really cool. I learned a few things today, and it’s all because that creepy vacant house has been standing there for 3 years just waiting to be photographed.

A lot of things can happen in a half century. Life is so weird. From Colorado, moved to CA, lived in Darby, MT, moved to WA. Became homeless for 7 years total. Changed my perspective. Subsidized housing. Recently found out I'm adopted. 50 % Polish, 50 % Belgium, 1st generation. Have my Charley Waffle, and just try to roll with whatever comes our way! View all posts by KC