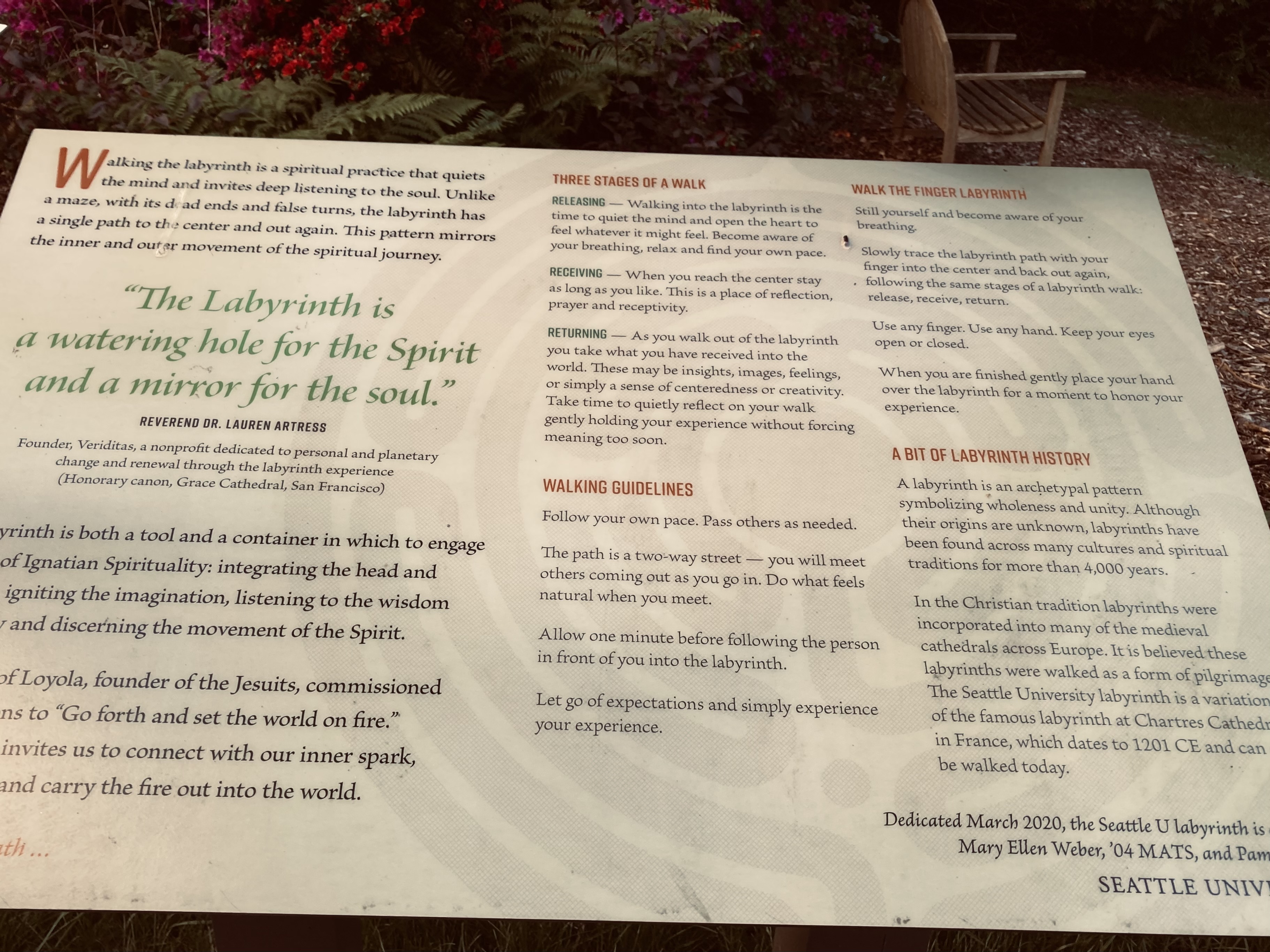 Charley and I have been hanging out at this here Labyrinth. It’s our little hidden spot that we’ve grown to absolutely love. She gets to run and hop and fetch and catch while I can pretend I’ might or hope to have a brief moment to relax and take a breath…. But so far that has not happened. As soon as I sit down on the grass just when it seems she wants to kick it for a minute she jumps up , screams “PSYCH!!! “and we start the whole process over.

That makes it extra difficult for I’ve realized at 50 that “old” people were abdoiilt right. My body aches horribly. Standing up is a chore. I even caught myself doing the Jane Fonda for ARTHRITIS WORK-OUT periodically. So the sit down, jump up, down, hopes up, hopes down and no hope for rest wins…..

This weekend was the first time that I read the plaque, or tombstone, or whatever the dictionary defines a plaque, on the instructions, or excuse me, THE GUIDE of walking the labyrinth.

I WAS QUITE INTRIGUED. There is actually something really cool about a labyrinth.

I’d always thought a labyrinth was an entry to impending and inevitable doom. I attached the word to something dark and dank, Confusing my mind and making it hurt, (for I’m horrible with directions) , chains attached to the brick walls. Drip and scurry and chirp chirp sounds of all things creeping in a sewer t Throw in the occasional burning torch randomly in the wall making those freaky horror movie shadows. just totally mind- messing with me. Well, I guess kinda like the dungeon in “The Count of Monte Christo”. Or the snow covered grass LABYRINTH in “The Shining” where little boy REDRUM was being chased by a VERY DULL JACK.

It wasn’t until reading the plaque (marker, tombstone, I learned I’d been thinking of a MAZE. The one MAZE where the Minotaur would be waiting for me with a huge scythe or-a whippy thingy with nowhere to go, breathing hot snotty and scary sounds at me.

It dawned on me I was confusing the word LABYRINTH that was in Greek mythology of, I guess the creature Minotaur. Which actually was considered more of a MAZE. Not a LABYRINTH.

this whole time of 2 months, we’ve been going to this place, it spooked me to walk on it, for even LOOK at it for what I thought it represented, …. I knew the GREEK Minotaur wouldn’t show , but just maybe A MODERN -DAY MINOTAUR could awaken. I mean, come on now.

EVERYTIME we’d gone to this site (it’s inside a college campus ) the intentions were to stay 30 minutes. But, alas, EVERYTIME 30 minutes, though painful at first, our “VIBE” would kick in, and we would GET IT ON. Frisbees would fly, balls kicked, thrown, we’d play hide and seek. (She’s amazingly awesome good ) ANYTHING to wear HER down.

We equally ended up worn down, in a gleefully playful way. I felt like I’d just been called in from 3rd grade recess, She plopped down panting in the grass while I breathing heavy, BUT GOSH, THAT WAS FUN!!!!,

That’s when I took the time to look at the guide. And I decided to give it a go.

I started at the entry of the labyrinth and tried to quiet my mind. I have always found that is so hard to do. I will begin emptying my mind, then started thinking about emptying my mind and what I was emptying. I tried to listen to the chirps of the little birds, the crack of a branch, the leaves that were rustling and where they were rustling. The flowers, then…(is somebody hiding in the bushes watching? Could it be the new age Minotaur ) …

I looked at Charley. Her ears were up but not in an alert way. Her eyes were inquisitive directed at me. Well, she hadn’t jumped up. She didn’t seem spooked. She was just intent on what-the-heck is she doing? Well, I guess it’s all good. I continued on, and just decided just not to think about what I was doing. I giggled about Charley’s look. She’s so cute. I was hoping she wouldn’t jump up and distract me. But hey, I’m going to do this

Charley did hop up and galloped around me, threw a ball at my feet, Grabbed a frisbee, but I continued. Oddly she began slowly trotting next to me, on the outskirts of the labyrinth,

It became all quiet around. Just nature’s sounds. I concentrated on the quietness until the quiet became loud. I totally understand when silence is described that way. It was loud.

I finished at the center, and there I am to just breathe. To think what I took at of it. What I may or may not have learned.

I felt good. My face felt relaxed. I was aware of the trees, and bushes. The color of the flowers popped. I looked at Charley and she was looking at me. Her tail was wagging in her puppiness. The light wafty lazy wag. She sat down and started rolling in the grass smiling.

I learned that the LABYRINTH was not creepy or scary. No Minotaur.

Just Charley and I. Grinning. It was a cool day. We walked slowly home. The rest of the night was lived every moment. I actually LIVED in the moment. 100%. That only happens at random times when I really, really try. This was effortless. It was an awesome day.

How do other people live in the moment? Do others live in the moment EVERY moment? Am I concentrating more on that now that I’m 50 and realized that the little small things seem so much grander? I’m not sure, but I’m going to do the labyrinth again. 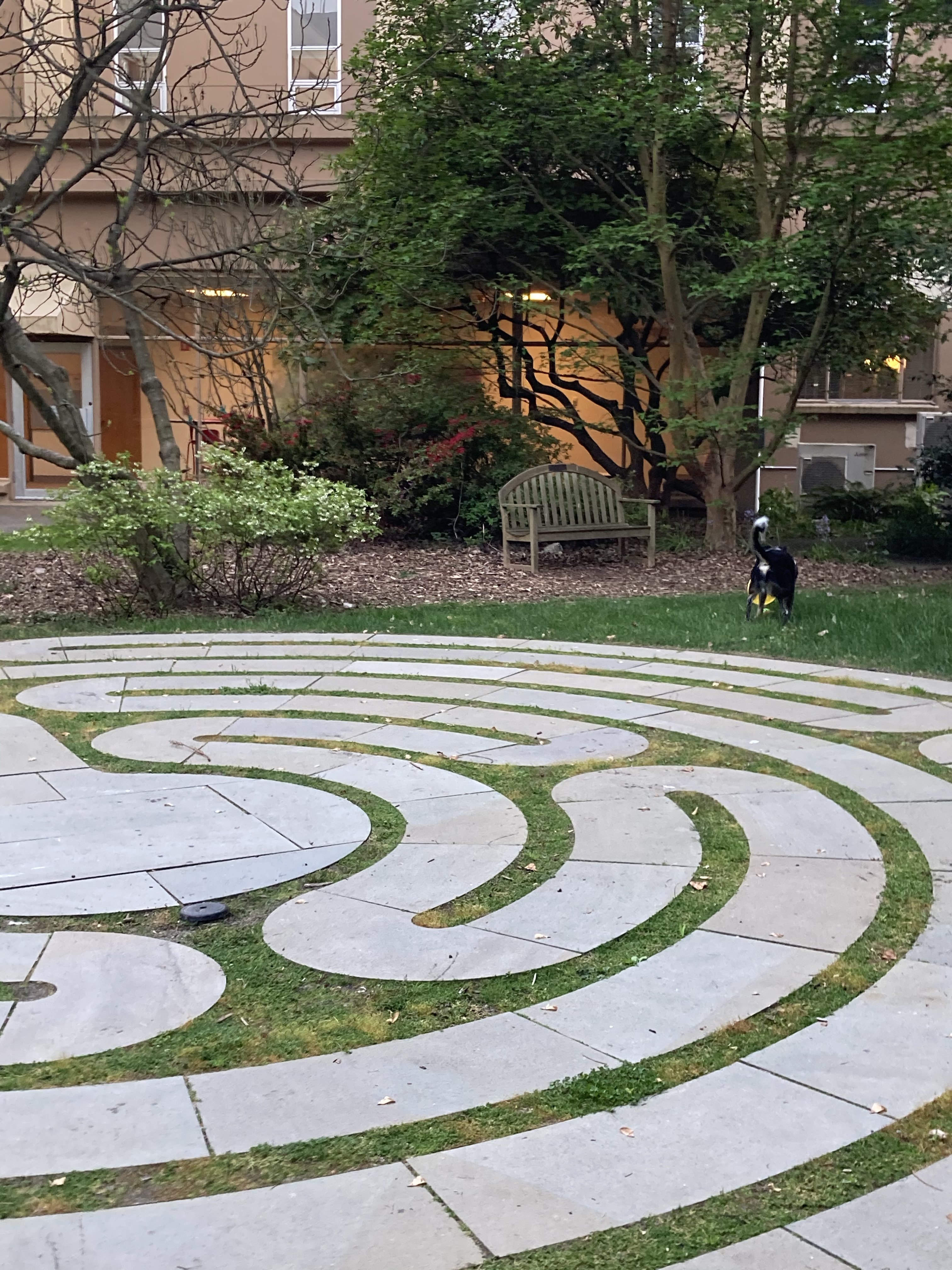 The instructions, guide for labyrinth

A lot of things can happen in a half century. Life is so weird. View all posts by Charley